The Safe Childbirth Checklist is a 28-item checklist that addresses critical concerns during four stages of childbirth: admission, just before pushing, soon after birth,and before discharge. It is specifically designed to target the main causes of death to women and babies in childbirth, including hemorrhage, infection, obstructed labor, and hyerptsensive disorders in mothers, and birth asphyxia, infection, and complications related to prematurity in newborns. 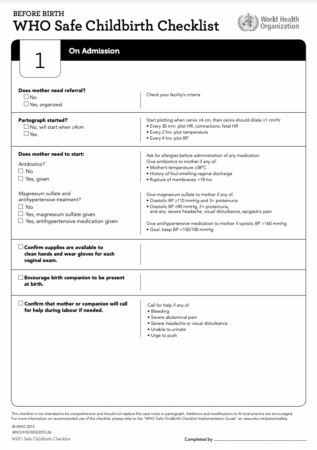 The Checklist was developed in 2009, when, inspired by the success of the WHO Surgical Safety Checklist, WHO launched an investigation into whether a similar approach could be used to improve the quality of care during facility-based labor and delivery. A group of researchers at the Harvard T.H. Chan School of Public Health led by Ariadne Labs Executive Director Dr. Atul Gawande was engaged as lead technical partners in the process.

The Checklist was refined through ongoing discussions with a collaborator network, and field tested beginning in January 2010 in Kenya, Tanzania, Ghana, Nigeria, Mali, India, China, Pakistan and Egypt. The revised version, along with a model of supportive, peer-to-peer coaching for birth attendants, was then piloted in Karnataka, India. Between July and December 2010, use of the Checklist by birth attendants in Karnataka resulted in an increase in the number of life-saving practices completed, from 34 percent of the Checklist items at baseline to 97 percent in the intervention.

The WHO Safe Childbirth Checklist is currently implemented and evaluated in more than 30 countries around the world, from Namibia to Mexico to Italy. Work is underway to identify methods for further improving implementation of the Checklist and to develop additional strategies to achieve reductions in death and suffering for mothers and newborns.

The WHO Safe Childbirth Checklist Collaboration brought together health providers from around the world using the Checklist to share strategies and lessons learned. The Collaboration provided a platform for the learning and sharing of experiences, contributing to the broader work of achieving the UN’s Sustainable Development Goal to reduce the global maternal mortality ratio to less than 70 per 100,000 live births by 2030.